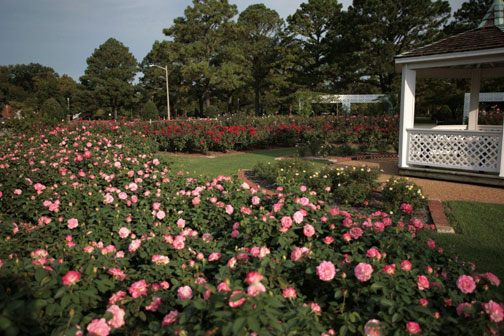 The Rose Garden at Huntington Park, located in historic Huntington Park, bursts into a carnival of color by early May and remains in bloom until late October or November. Hybrid tea, grandiflora, floribunda, climber, shrub, and miniature roses are represented in the 74 varieties of the 1000 bush garden.

Individuals and organizations are encouraged to support the garden renovation projects through tax-deductible donations. Gifts of at least $600 will be recognized by a plaque placed in a newly renovated bed. Other gifts will be acknowledged by a certificate.

Please include:
Additional information is available by calling the Landscape Services Office at 757-591-4844.

The rose garden is a beautiful setting for spring, summer, or fall weddings. A reservation and a fee are required and arrangements are made through the Parks and Recreation Operations Office by calling 757-886-7912.

The garden also serves as a rose grower's classroom. Informational tours, educational programs, and individual consultations with the garden rosarians can be arranged through the Landscape Services Office by calling 757-591-4844.

The land was donated to the City of Newport News in 1924 "for the purpose of a public park and recreation ground." Henry E. Huntington, an official of the Chesapeake and Ohio Railway, the first chairman of the board of the Newport News Shipbuilding and Dry Dock Company, and a director of the Old Dominion Land Company, was instrumental in facilitating the donation of this valuable Warwick County property to the city. He was the nephew of Collis P. Huntington (1821-1900) who brought the Chesapeake and Ohio Railway to Newport News Point in the 1880s and founded the modern City of Newport News. He also founded the shipyard which was the first commercial venture and the first industry in the State of Virginia.

During the late 1960s, city officials decided that "a city this size needed a rose garden." The site selected is on part of the former Ferguson Park housing development. To provide emergency accommodations for shipbuilders on the eve of World War II, the U.S. Navy built a 5,000 person housing development which was first occupied in 1941. Ferguson Park, which honored Shipyard President Homer L. Ferguson (1878-1953), was vacated and razed beginning September 1, 1965.

The garden, which opened in 1970, was the result of a joint effort between the city and the Virginia Peninsula Rose Society. The initial planting (approximately 750 bushes) was predominantly hybrid tea and grandiflora roses chosen for their hardiness and adaptability. Also planted were floribundas and tree roses. In 1975, the garden was beautifully expanded thanks to the donation of the prized roses of Williamsburg Mayor and retired dentist Dr. Henry M. Stryker, who died in 1974. A second expansion occurred in the 1980s with the gift of roses from the garden of local businessman Charles F. Garner.

In the late 1980s, trellises were constructed in four beds to accommodate climbing roses, and brick borders were added to the beds. A gazebo was also added in the center of the garden.

During 1990 and 1991, a major revitalization project was undertaken to replace plants that had been damaged by disease and severe winter weather. At that time, approximately 600 of the roses were replaced, giving the garden a total of about 900 bushes.

Tax deductible donations to the Rose Garden at Huntington Park are a wonderful way to remember family and friends for years to come. Donations will be placed in a restricted plant fund to be used for the purchase of new plants for the rose garden. An acknowledgement will be sent to the honored individual or family of the person memorialized.