RED Means Stop! Newport News’ photo red light enforcement program is titled PHOTOSafe. Our city’s goal is to simply gain compliance with traffic signals which will significantly contribute to public safety. The camera systems are a force multiplier for the uniformed police officer and they reduce the risks involved in the red light violation enforcement of large intersections.

The key to the program’s success is public knowledge of the systems and the assurance that if you run a red light, your vehicle will be photographed and you will receive a civil penalty for the violation. Therefore, the locations of monitored intersections will be highly publicized as they become active. Information on the Virginia law governing the photo-monitoring systems to enforce traffic light signals can be found under the Code of Virginia section 15.2-968.1.

The Penalty
The penalty for a photo enforced red light running violation is a $50 penalty and no court costs are associated with the penalty. The violation is a civil matter. There are no driver license points assessed and there are no insurance implications. By law, the Department of Motor Vehicles and insurance companies cannot be notified of the offense. This violation does not affect drivers that are on probation with the court or with the Department of Motor Vehicles.

The operator of the vehicle is liable for the monetary penalty imposed from information obtained from the red light camera system. The video and photographed evidence of the red light violation will be available for review and inspection by the registered owner or driver of the vehicle. There is a legal presumption that the registered owner, lessee, or renter of the vehicle was the person who committed the violation. This presumption can be challenged by affidavit or testimony under oath in open court that the owner, lessee, or renter was not the driver at the time of the violation.

How it Works
The PHOTOSafe program is designed to reduce the number of violations by automatically capturing evidence of vehicles whose drivers violate the law. Photo enforced signs are located within 500 feet of the intersection in an effort to remind drivers to comply with the traffic signal. The enforcement cameras are only active during the red cycle of the traffic light. Vehicles that enter the intersection after the light has turned red for .5 or ½ second are captured. The camera system is wired to the traffic lights and to sensors that are buried in the lanes of the roadway surface. Vehicles that cross the sensors after the light has turned red activate the system. The violating vehicle is photographed 3 times and a 12 second video of the violation captures the vehicle in motion. The first photo is taken at the stop bar as evidence to show that the light was red prior to the vehicle entering the intersection; the second photo is the vehicle’s license plate for identification purposes; the third photo is taken to show evidence of the vehicle proceeding through the intersection while the light is still red. The photographed documentation of the red light violation is evidence for the police department to issue a civil penalty to the owner of the vehicle. 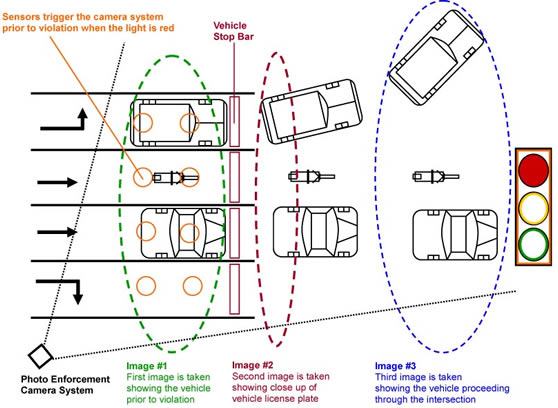 The diagram above is a representation of the PHOTOSafe camera systems used in the City of Newport News. This picture illustrates a single intersection approach with three vehicles in violation of the traffic signal. Each system contains multiple cameras that can capture multiple lane violations occurring at the same time.  Drivers are reminded that our systems do capture right turn on red violations.

Learn More
The primary focus of the PHOTOSafe program is public awareness and education. The success of the program is measured in the reduction of red light running and not by the number of vehicles caught violating the law. Please review the information in the Related Documents section of this site.  If you have other questions or would like schedule a detailed PowerPoint presentation for your organization, contact the PHOTOSafe Program Coordinator by phone at 757-975-5027 or by email.
/FAQ.aspx