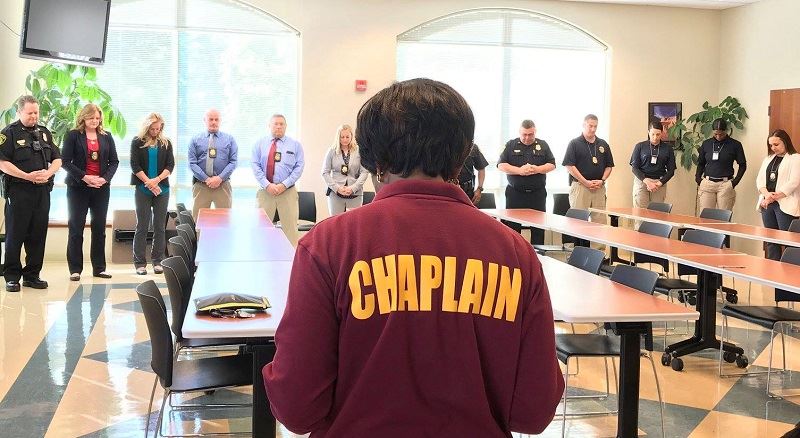 NNPD's volunteer chaplains are available for counseling services to members of the department and citizens 24 hours a day.  They volunteer for various needs, including assisting officers with death notifications; assisting the next of kin in untimely death cases; and assisting families of officers injured or killed. Chaplains are also available to ride along with officers during the routine course of their duties and participate in community walks and other events. 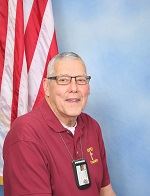 Volunteer Chaplain Walter G. Satchell Jr. joined the NNPD as an Auxiliary Police Officer in 1988. He served in that role until 1999 and then joined as a chaplain in 2012. The Newport News native is currently the Associate Pastor/Pastoral Care at First Baptist Church. He was the Church Administrator from 2006 to 2012 and ordained to the Gospel Ministry in 2012.

Chaplain Satchell earned his Bachelor of Arts from Lynchburg College. He was employed by Newport News Shipbuilding from 1965 to 1995 and U.S. Foodservice from 1995 to 2006.

Chaplain Satchell is married to Jane and has one daughter, Lisa, and one son, Scott, and five grandchildren.

Chaplain Satchell says he has always had a longing to get into Law Enforcement work. When he learned of NNPD’s Auxiliary Police program, he applied and was accepted.

“I spent 11 years in the program and fulfilled my desire for police work, but more so I was able to fulfill my love for people and my love to help people,” he said. “Many times I was able to help during incidents and see the change in people’s lives by just talking with them and spending a few moments of quality time with them.”

“I also worked hard to make the public aware that Police Officers are there to serve and protect, not to harass or put people down.  I believe I have accomplished this during my years of service to the city.” 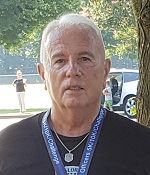 Volunteer Chaplain Don Reid joined the NNPD in 2011 after moving to the Newport News area. He is a Stephen Minister with Chestnut Memorial United Methodist Church. He is a Certified Christian Chaplain through the International Federation of Christian Chaplains and a Certified Emergency Services Chaplain by Assemblies of God Theological Seminary.  He has been a lay speaker in the United Methodist Church and the Congregational Church, UCC for over 50 years.

Chaplain Reid was born in Central Indiana and retired in Connecticut in 2009. He is a U.S. Navy veteran. Chaplain Reid has volunteered in multiple roles, including in the Criminal Courts as a Probation Officer and Pre-Sentence Writer, and as a Victim Assistant with the Marion County (IN) Sheriff's Office, now part of the Indianapolis Metropolitan Police Department. In Connecticut, he volunteered with the Pastoral Care Office of the local hospital.

Chaplain Reid is currently National Co-Chaplain with the Missing in America Project. He is a member of the American Legion, Post 368 in Newport News and is also a member of Connecticut MOLLUS (Military Order Loyal Legion United States); a Past Department Commander of the Sons of Union Veterans of the Civil War, Department of Connecticut; and current Commander of H. A. Grant Camp 24 of the SUVCW.

Chaplain Reid says he was inspired to volunteer in law enforcement by a high school classmate and friend, Ron Manley.

“Ron was not only a friend but a neighbor in Indiana, and we both had kids the same age.  Ron was a Police Officer with the Indianapolis Police Department (now the Indianapolis Metropolitan Police Department), and I rode with him frequently sharing many adventures and experiences in what the real job of a police officer entails. On December 12, 1974, Ron made the ultimate sacrifice for his city and department as a Line of Duty Death.  Since that time, I have annually run a 5K in Ron's memory and maintain contact with his family in Indiana.  Ron's name is on line five, panel 53W, of the National Law Enforcement Officer Memorial in Washington, DC.”

“Volunteering in probation and law enforcement is my way of honoring Ron's memory and keeping his name alive.  No one truly dies until they are forgotten.  Ron will always be remembered as a police officer, but more so as a caring and selfless individual.” 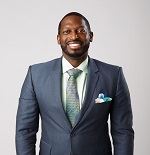 Volunteer Chaplain Dr. Willard Maxwell Jr. joined the NNPD in 2014. Chaplain Maxwell is the Senior Pastor at New Beech Grove Baptist Church in Newport News. A native of Atlanta, Georgia, Chaplain Maxwell served as an educator, administrator and principal in the Atlanta Public School System. He holds a Master of Divinity degree from Morehouse School of Religion, a Doctorate in Educational Leadership from Argosy University, a Bachelor of Science in Exceptional Education from Georgia Southern University, and a Pastor Counseling Certification from Emory University.

Chaplain Maxwell serves in various roles in the community, including on the Newport News Planning Commission; on the board of the Newport News Police Foundation; is an adjunct professor at the William Harvey Leadership Academy at Hampton University; and is a Silver Lifetime member of the NAACP. Chaplain Maxwell supports and collaborates with a host of other local and regional community and civic organizations to serve and enhance the community.

Chaplain Maxwell is an entrepreneur and has an extensive background in real estate. He holds an active broker’s license and leverages his business skills to conduct workshops for churches and communities on topics such as real estate investing, financial management and community and economic development.

Additionally, Chaplain Maxwell makes time to enjoy the arts. He is saxophonist and stand-up Christian comedian.

Chaplain Maxwell says he volunteers with the NNPD as a way to bridge the gap between the police and the community, particularly the African American community.

“I want to create positive interactions between the two groups, so that each side views the other as fellow human beings and not objects,” he said. 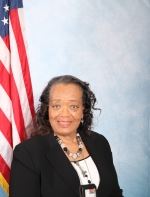 Volunteer Chaplain Dr. Maria Saunders joined the NNPD in February 2016. Chaplain Saunders is a licensed and ordained minister and has served in pastoral ministry for 11 years. She leads the New Members' Ministry, Women's Ministry, and is an instructor for ministers and teachers training at New Grace Church in Newport News.

Chaplain Saunders holds a Doctor of Ministry degree. She has taught at several seminary and bible colleges, conventions and workshops, federal government, and for private industry. She is a former Executive Director for victims of domestic violence and sexual assault and at a homeless shelter. She also served as Director of Administrative Services for an ex-offenders substance abuse (drug addiction and alcoholism) program.

Chaplain Saunders’ passion is to empower broken individuals and others to become holistically sound. She authored her first book "Come with Me to the Secret Place."

Since retiring from the federal government (as a computer specialist...software instructor), Chaplain Saunders discovered the joy in abstract painting. She loves to preach, sing, and listen to gospel music.

Chaplain Saunders is married to Mr. Rodney Jarvis. She has three children: Retired CSM Torland Wingfield, Dr. Kimberly Wingfield (DVM), and Dr. Tyffani Wingfield (Ph.D.).  Lastly, her most important quality is that she seriously loves the Lord. Her motto is "Never close a door that is opened by God's hands...walk through the door and keep the faith."

Chaplain Saunders volunteers for the NNPD because she is passionate about helping others. “This is where I can utilize my experience in helping the hurting,” she said.

Chaplain Grimes, the youngest of seven children, was born in Gary, Indiana. He began preaching following his baptism at the age of 17. He received his license in 1989 from Union Baptist Bethel Church. He established World Harvest Kingdom Church in 1999. Today, Chaplain Grimes is a pastor, teacher, administrator and motivational speaker.

Chaplain Grimes’ educational achievements are his greatest testimony of faith. Born with a speech impediment, he said his early learning pursuits were stifled. However, following his baptism, he went on to obtain multiple degrees “to the glory of God.” He holds a bachelor’s degree in psychology from Norfolk State University; a master of education from Cambridge College; a master of divinity from Norfolk Theological Seminary and College; and an honorary doctorate of divinity from United Christian College. He is currently working to complete his masters in clinical mental health counseling.

Chaplain Grimes is married to Rosalind, and they have four children: Cuyler, Cameron, Kamay and Caleb.

Chaplain Grimes says he chose to volunteer with the department so he can serve alongside the first responders of NNPD and NNFD.

“I use interpersonal skills to listen to parishioners' worries, fears, hopes, and grief and to provide comfort, counseling, and spiritual guidance in response to their issues,” he said. “I work with people one-on-one and in small groups to work through big spiritual questions.” 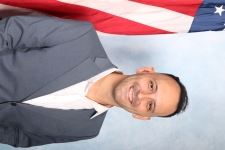 Volunteer Chaplain Ben Rothwell joined the NNPD in 2019. He is the pastor at CrossWalk Church in Newport News.

Chaplain Rothwell said he became a chaplain with the NNPD to be a part of leading change and providing care in our city.

"I believe the best days are ahead for Newport News, and I feel we can all be a part in making that belief a reality," he said. 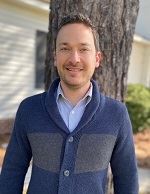 Volunteer Chaplain Ryan Davidson joined the NNPD in 2019. Chaplain Davidson is the pastor of Grace Baptist Church in Hampton.

Chaplain Davidson has been involved in running a counseling center, serving in several churches pastorally and in teaching in colleges and seminaries. He is also a Licensed Professional Counselor in the Commonwealth of Virginia and has spent years offering counseling and psychotherapy and has supervised many new counselors.

Chaplain Davidson is a graduate of Samford University (B.A.), The College of William & Mary (M.Ed.), The Southern Baptist Theological Seminary (Th.M.) and is a Ph.D. candidate at the Free University of Amsterdam.

He has been married for 15 years, and he and his lovely wife have four children.

“Supporting our law enforcement officers and fire personnel is crucial,” he said. “They lay their lives down for those in the city they serve. It is indeed a privilege to offer them support.” 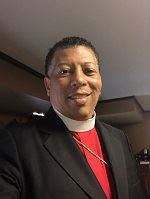 Volunteer Chaplain Bishop Felton Hawkins joined the NNPD in 2020. He is the founder and pastor of Full Gospel Kingdom Church in Newport News.

Chaplain Hawkins has a bachelor of religious studies from Hampton University and a master’s degree in organizational leadership from Regent University. He has authored four books: “Developing Christians for Leadership,” “Building a Great House – Overcoming Life’s Ordinary to Possess God’s Extraordinary,” “Man of the House – Woman of the House: Get Ready to Take Dominion” (a flip it book) and "Increase! Self-Value, Personal Equity, Leadership IQ."

Chaplain Hawkins is the presiding prelate of the Full Gospel Kingdom Churches Association, Inc., building and assisting leaders and pastors in their effort to carry out their visions. He travels both nationally and internationally conducting workshops and training sessions, including leadership development, organizational vision, and organizational change.

Chaplain Hawkins is married to Jasanta. They have five sons and one daughter.

Bishop Hawkins is committed to serving his community and working for the reconciliation of people from all walks of life. Becoming a chaplain allows him to stay connected with the community he serves daily.

“I chose to become a chaplain with NNPD because I respect Chief Drew's commitment to work and focus on community policing. I also wanted to find another effective way to connect and support both the officers and the community for better relationships.”