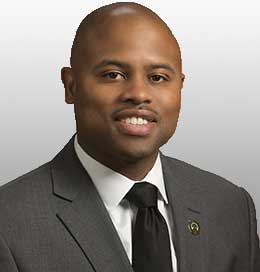 Councilman Harris can be contacted by emailing City Council, calling 757-926-8618 or by mailing the address below.

Councilman Marcellus L. "B2" Harris III was born and raised in Newport News, Virginia and was a part of the last graduating class at Ferguson High School. Mr. Harris is married to Rasheena Harris and they have two children, Marlinda Harris and Marcellus Harris IV.

Councilman Harris received a Bachelor of Science Degree in Child Development and Family Relations from East Carolina University in Greenville, N.C. and a Master of Arts Degree in Counseling from Hampton University.

Since 2005, Councilman Harris has worked for the Newport News Public Schools as an Academic Counselor and Advisor. While serving as a counselor at the elementary school level (Greenwood, Newsome Park, and Epes Elementary Schools), he founded the P.R.I.D.E. Program (Perfecting Responsible and Intelligent Demeanor Everyday), which is a mentoring and empowerment program structured to motivate and provide programmatic support for elementary age male students needed to achieve abundant levels of success academically and socially. The P.R.I.D.E. program stresses the development of character traits and social skills necessary for academic success.

Through the P.R.I.D.E program, Councilman Harris, with the help of his colleagues, coordinated the first elementary-age male leadership conference at Newsome Park Elementary School. He has orchestrated numerous career fairs for young people to alert them about the various occupations available to them through hard work and a desire to achieve their goals. He has been a keynote speaker at schools across the City on citizenship, at academic and promotional ceremonies, as well as athletic banquets. He serves as the youth Minister at First Baptist Church Morrison in the City of Newport News, where his father served and retired as Pastor after 45 years of service.

Councilman Harris has served as an Academic Counselor at Denbigh High School since August 2010. He has served as Head Football Coach since July 2008. During the 2013 season, he led the team to its 7th winning season and its first playoff victory in the school's 50-year history. He loves using his students' passion for the game of football as life lessons from which all of the players could learn. Under Councilman Harris' leadership, numerous athletes from Denbigh High School have attended college, with some receiving athletic scholarships; many served in the military; and/or participated in various training programs. One of his proudest moments as an educator was witnessing one of his students receiving the prestigious Gates Millennium Scholarship, which is a highly prestigious honor for graduating high school seniors across the country.

Councilman Harris' passion is serving as a mentor and being a positive influence in the lives of young people, and their families, so they can recognize the shining examples they could offer to the City. He has always felt obligated to give back to the City of Newport News, which meant so much to him while growing up. Councilman Harris has continued the legacy set forth by his father - standing up for social injustice, equality for all, and being available to enlighten the citizens; as well as empowering our communities to enhance the City of Newport News.