The fire dangers inherent of Newport News during the late 1800s were hot coals from locomotives, gasoline or kerosene in lamps, fireplaces and ranges, coal soot accumulation in chimneys, and careless smoking. The City had no fire protection, and the feeble efforts of a bucket brigade were no match for the disastrous fires that burned homes, businesses, and city blocks. In 1891, citizens called a town meeting to organize a volunteer fire department. Donations were solicited from merchants to purchase firefighting equipment. In 1892, the first piece of apparatus was purchased, a horse-drawn steamer with a coal-fired pumping mechanism. The City did not own horses so they used manpower to pull it. The hardship of moving the steamer and the lack of a water system often resulted in a reversion to the bucket brigade system. Eventually, an agreement was made with Warwick County to share the horses used to pull their garbage wagon. When a fire occurred, the driver would unhook the horses from the garbage wagon and respond to the location of the steamer, hook up the horses, and haul it to the fire scene.

In 1896, when Newport News was incorporated into a city, a Board of Fire Commissioners was formed to carry out the administrative business of the Fire Department. This same year, the first fire station was built at 28th Street and Huntington Avenue. It housed the Chief’s buggy, a steam pump, and a hose reel. The Fire Chief and three drivers received a salary. Horses were now kept at the fire station. In 1897, Eagle Engine Company No. 3 was organized. There were now three fire companies: Truck Company No. 1, Lafayette Company, and Eagle Engine. The City still had just one fire station. 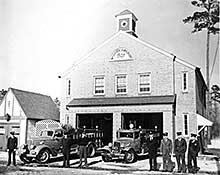