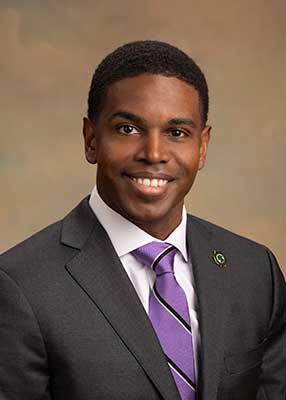 Mayor Jones can be contacted by emailing emailing the Mayor's Office, calling 757-926-8403 or by mailing the address below.

Phillip D. Jones is the 27th Mayor of Newport News, Virginia.  In this role, he strives to improve education, invest in public safety, and modernize City Hall. On January 10, 2023, Mayor Jones took the oath of office as the city's youngest-elected mayor.

Over the last decade, Mayor Jones has served in leadership roles in the public and private sectors. As a Marine Corps infantry officer, he led his Marines to support peacekeeping and security cooperation missions on multiple continents. As a management consultant with a leading global firm, he advised Fortune 500 companies, municipalities, and nonprofits on strategy, marketing, organization, and operations across all industries.

In the wake of 9/11, Mayor Jones accepted a nomination to the United States Naval Academy, where he graduated with merit with a Bachelor of Science in History. He completed his graduate course of studies at the Harvard Business School and Harvard Kennedy School, where he served as a Tillman Scholar and Co-President of the Veterans Club. He holds a Master of Business Administration (MBA) and a Master of Public Policy (MPP).