Newport News Celebrates 50 Years of Consolidation 1958-2008
A Great City - A Message From the Mayor
It was 50 years ago that Warwick and Newport News merged to give birth to a new city. Today, I am proud to join with you in celebrating this important milestone in the growth and development of Newport News. As I reflect, I see a rich history defined by the extraordinary leadership, hard-work, and vision of men and women from both Warwick and Newport News who believed in a bright future for their children and their children’s children. In commemorating this anniversary we pay tribute to the many farsighted individuals who built this city and worked to ensure that it would flourish.

Future Vision
History tells us that in 1946, just 12 years before the merger of Newport News and Warwick, the city of Newport News (founded in 1896) celebrated its 50th anniversary or what was called at that time its Golden Jubilee. For the historical record, local leaders of the time were asked to project what they anticipated lay ahead for the city in the next century. Those projections, now some 60 years later, provide us with insight into the vision and hope that our forefathers had for this great city.

City Manager Joseph C. Biggins projected, “I am of the opinion that this community will ultimately become a great city. In the not too distant future, it would not be unreasonable to expect a successful consolidation of portions of Warwick and Elizabeth City Counties with Newport News, thereby affecting many advantages and increasing the land area and population of the city. Air transportation facilities for the entire Lower Peninsula will undoubtedly be established. Physical connection with Norfolk in the form of a bridge or tunnel is not unlikely. Our waterfront facilities, now owned exclusively by the Chesapeake and Ohio Railway Company will be supplemented by additional private or publicly owned facilities for the development of ocean commerce though this port. Substandard housing in the city must give way to modern housing, leaving open spaces for light, air and recreation.”

Mr. Biggins goes on to say “but the area of the city and its population is not necessarily the yardstick by which a city is measured. More important are the elements of cultural and educational advantages, the ability of citizens to live together in peace and harmony, to rear their children in a proper environment, and the privilege of working for whom they please. Yes, Newport News will become a great city because its citizens have the ability and the determination to accomplish their objectives.”

Shipyard President Homer L. Ferguson continued in this vein, predicting “a future that will find Newport News the best city in the world in which a man or woman could grow old.”

Warick & Newport News Merger
And so it was that in 1958 we saw the merger of Warwick and Newport News. This political union of two distinct communities resulted in a new city that realized the fulfillment of the words of both Mr. Biggins and Mr. Ferguson. Out of our glorious past has come a bright and promising future. As we celebrate the golden anniversary of consolidation in 2008, Newport News is indeed not only a “great city,” but a city in which people thrive – a highly desirable place to live, learn, work and raise a family (and a place in which “a man or woman could grow old”). 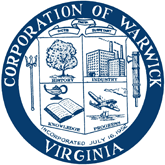 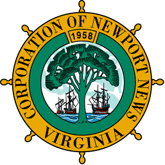 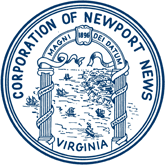 Newport News History
Consolidation was an economic imperative - a vision of hope for the future by far-sighted peninsula leaders that effected the merger. One might say consolidation was an eventuality from the moment of the city's 1896 founding. Newport News' tight geography and its role as the economic and industrial heart of the Peninsula defined the outcome.
As early as the turn of the century, home seekers who felt confined by the bounds of Newport News' original four square mile limits were moving into the surrounding countryside. North End and East End, built in adjacent Warwick County, were the city's first suburbs. Pioneer citizens built substantial neighborhoods on the banks of the James and in adjoining Elizabeth City County. Infrastructure in the form of gas, electricity, water, sewage, telephones and roads were extended to these areas.

World War I
The need to develop the countryside was accelerated by World War I when Newport News was established as a port of embarkation. Five large military camps were erected in Warwick; new highways were built to connect them to the port and warehouses ringed the city. The industrial expansion and population spiral resulted in the construction of Hilton Village, four miles distant from the city. This development of some 500 residences, constructed by the War Shipping Board, was to house the surge of shipyard families who had come to the area. Hilton was linked to Newport News by the extension of trolley service.
World War II
During the Second World War, Newport News again served America as a major embarkation depot. 1.5 million military personnel passed through the city and neighboring camps. The shipyard did its part to insure victory by building many of the vessels that transported these troops to the battle zones. The yard's work force more than doubled to accomplish this mission. Consequently, the city witnessed an influx of residents unparalleled in its history. The civilian population rose to 189,000, an astounding 77.2%, the second largest increase in the nation. Families were urged to rent out spare rooms to accommodate the new arrivals.

At boarding houses, shipyard workers slept in shifts by rotating so-called “hot beds.” Churches and service organizations such as the YMCA and Salvation Army opened their doors to help handle the overflow. As the industrial and economic base of the Peninsula’s economy, the city was taxed to its limit to provide services. Neighboring Warwick County alleviated some of the strain as workers settled there. The county population tripled from 9,248 residents in 1940 to 33,950 by 1945.
Post-War Era
In the post-war era, the trek to the suburbs hastened from the crowded city. Many things accelerated this trend: the availability of building material and federal financing for home building, new roads as a result of the war buildup, and the ability to again purchase automobiles for private use. Warwick County leaders struggled in the postwar era to provide services to its burgeoning populace. The population rose from 39,875 in 1950 to 49,326 in 1955. Developers created subdivisions in once fertile farm fields. Brandon Heights, Warwick on the James, Hidenwood, Beaconsdale and Riverside were bedroom communities for residents who still mostly worked in Newport News.

Warwick County
However, with this swift population movement to the surrounding territory, Warwick was hard pressed to provide vital improvements such as schools, sewers, bridges, underpasses and hard-surfaced streets to support the new developments. The county's tax base, primarily sustained by revenues from home owners and small businesses was insufficient to quickly meet these needs. Consequently, county supervisors proceeded with deliberate conservatism. Thousands of persons who earned their livelihoods in Newport News, but lived outside the city limits, felt restricted by the county's cautious political process. By contrast, the city's financial picture was quite favorable thanks to its large industrial base, ownership of the profitable waterworks system and maturing bonds. Consolidation seemed a ready-made solution to the acuteness of Warwick's economic dilemma and to the general well-being of the region.
Consolidation Attempts
In an effort to bring governmental change, several efforts at consolidation were attempted. In 1950 a five-way consolidation was tried with the nearby city of Hampton, the town of Phoebus and the counties of Warwick and Elizabeth City, but failed by reason of an adverse Hampton vote. Fierce opposition from Norfolk was also encountered because of the proposed new name, the City of Hampton Roads. In 1952, Hampton, Phoebus and Elizabeth City incorporated as a city, proclaiming their independence from Newport News. Likewise, in an effort to stave off amalgamation with Newport News, Warwick also became a city that year. Realizing the seriousness of the situation, a group of community leaders met in early 1955 to again head a movement for Peninsula-wide consolidation. The referendum for a three-way consolidation held the following year was once more defeated by Hampton. With that city thus eliminated, Newport News and Warwick citizens organized to bring about a union.

The campaign was heated. Opposition in Warwick by older residents, who did not favor “progress” was stiff. Political cartoons depicted the 10-square-mile city as a wolf ready to pounce on the naive Warwick and swallow it up. The unification was hard pushed in the press with each campaign pointing out the benefits and disadvantages of the issue. The referendum was decided on July 16, 1957, passing by overwhelming vote in Newport News (4,398 to 873) and by a closer margin in Warwick (3,938 to 3,253).

In preparation for the transition, elections were held to select new councilmen and the name of the new city. Committees were appointed to address a variety of issues ranging from rewriting the charter to revising budgets and tax structures. On July 1, 1958, the new council was sworn in at the courthouse downtown. O.J. Brittingham, Jr. was elected mayor. As the council's first order of business, Joseph C. Biggins was formally appointed as the city manager. 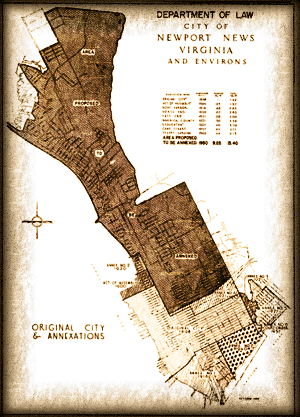 Annexation Festivities
The festivities then moved to the War Memorial Museum where Governor J. Lindsay Almond presented remarks. After the formalities, there was a ceremony at the dividing line between the two cities at 64th Street and Huntington Avenue. A giant pair of scissors was wielded by Mrs. Homer L. Ferguson, resident of old Warwick and Mrs. Philip Hiden, resident of old Newport News to symbolically cut the ribbons dividing the two communities. A celebratory parade capped the festivities.

So, it was that the greater city of Newport News came into being, then the third largest in population in Virginia and the largest in area. As reported afterward, public spirited citizens had achieved their objective to create “a well ordered municipal organization with plans looking toward future developments.” 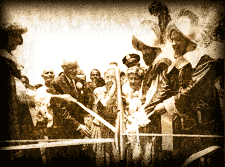